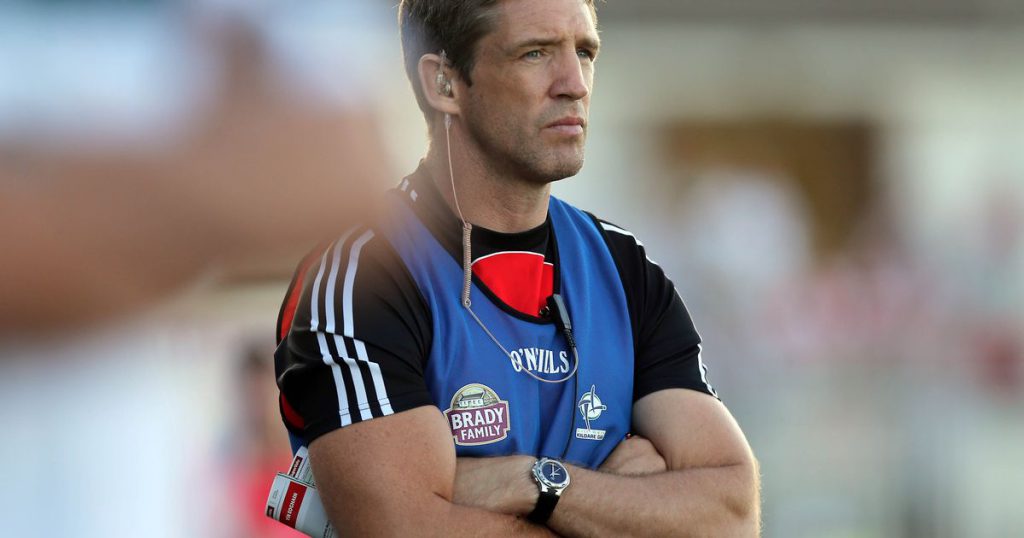 Watching the ever-brilliant Laochra Gael episode on Dermot Earley Junior on TG4 tonight and seeing Kieran McGeeney interviewed about Dermot reminded me just how big an influence the Armagh man was on that group of players. Peter Kelly alluded to it as well in his Nationalist interview in recent weeks, saying that training has lacked the intensity of those days under more recent managers.

I was furious when McGeeney was sent packing in 2013 and I wrote one of my first articles about it for the GAAScores.com website.

I have reproduced it here,

It can only have been down to a mass outbreak of sunstroke. With temperatures perversely climbing back into the mid-20’s, how else to explain what went on in Newbridge last night?

The bare facts: Kildare’s County Board executive agreed to propose the retention of Kieran McGeeney as county football manager for a further, seventh, year. It was decided to put that to a vote of club delegates. 29 voted against the motion, 28 four.

4 members of the same executive committee apparently decided to vote against their joint recommendation. 4 clubs including one of the biggest and most successful in the county reportedly abstained. We are supposed to believe they had no viewpoint on the appointment of the most important managerial position in the county. Democracy in action. The people have spoken, right?

There’s a fair few counties who would have taken that record over the last 6 years. We haven’t even mentioned Leinster titles at Junior and Minor level in 2013 to complete an unprecedented treble for the county. But apparently it’s not good enough for Kildare. No, Kildare need change.

Mighty Kildare. No All Ireland senior title since Sam Maguire was handed out for the first time in 1928. 85 years and a fair few heatwaves ago. 50 years since the last All Ireland at any level. Eight successive losing finals in all grades. No National League Division One titles ever. Two senior Leinster titles since 1956, with only one manager, the great Micko, able to achieve that feat. Mighty Kildare. The Wolverhampton Wanderers of Gaelic football.

“I’ve never been ashamed in my life to be a Kildare footballer, until tonight” (Eamon Callaghan, Kildare captain)

“A disgraceful way to treat a man who put so much heart and effort into Kildare football” (Emmet Bolton, long-serving Kildare player)

One could go on. Tweet after tweet. An outpouring of shock, hurt and downright anger from the squad on social media overnight. From the likes of Doyle to some who generally warmed the bench in 2013 like Mikey Conway, Hugh Lynch and Alan  Smith, the outpouring of player support for McGeeney was overwhelming. Not just a clique of Geezer’s favourites then.

But sure what would they know?

The more you look at it, you have to look beyond results to get to the heart of last night’s events.

As Kildare planned for 2013, on the back of a dis-appointing hammering by Cork in the All Ireland Quarter Final (reminder : their fifth in a row), it surely was no secret that the team needed an infusion of youth to further its progress?

With an exciting under-21 team banging down the senior team’s door, McGeeney was clearly given a mandate to oversee the transition from one team to another. Surely the footnote to that objective wasn’t to bring home a Leinster or All Ireland title in the first year of that process? (Reminder: that would be the third Leinster in 57 years).

No – this wasn’t a matter of poor results. Sure, Kildare were given the hammering of all hammerings by Dublin in June. That’ll All Ireland finalists Dublin who just won the game of the ages at the week end scoring 3-18 against the aristocrats from Kerry (they went just one point better by notching 4-16 against an admittedly callow and outplayed Kildare). And for sure, Kildare players disappointed themselves more than anyone when coming up short against Tyrone in Newbridge during the last heatwave in July. By all of 2 points. That’ll be Tyrone who reached the League Final and All Ireland Semi Final.

None of this is to suggest McGeeney was without fault. Even his  supporters would question the failure to find a cohesive midfield partnership in recent years, or a solution to the problem centre back position in which the man himself excelled. Or the lack of consistency in his forward line selections. One could argue that the balance between strength and athleticism and football skills and tactical awareness was unduly weighted towards the first two. The “gym monkey” argument was not totally without merit.

But no, you cannot rationalise this on results or lack of progress.

This was about the club. It was about access to players and the power that McGeeney was seen to wield in not releasing those players back to their clubs enough. To stall the club championship into Autumn. It’s not an issue unique to Kildare, it’s endemic in the GAA. But it has bubbled away and last night was payback time.

Secondly the Seanie Johnston fiasco cannot but have played a part. With the benefit of hindsight even the Geezer might now admit that was not his finest hour. The love affair could only end in tears with Johnston’s return up the M3 with his tail between his legs and a hastily purchased bunch of service station blooms for his jilted first love.

So what happens now? The Kildare players apparently met on Wednesday night to “discuss the issue further and formulate a response”. While borne out of anger and loyalty to their manager, this is surely a situation beyond redemption.

Even if by some convoluted machinations last night’s decision got overturned on some technicality (or normal Irish temperatures bringing cooler heads and an outpouring of contrition), it is unimaginable that McGeeney would walk back into Kildare to take up the reigns as if nothing had happened. Why should he? With that gaping knife wound in his back. No, that boat has sailed sadly.

The appointment of a new manager is one for another day. Glen Ryan, whose record with Longford was promising but ultimately inconclusive, Jason Ryan, McGeeney’s trainer for the last year, and the highly regarded Cian O’Neill, will top the initial betting list no doubt.

But what is the new manager coming into and will many candidates relish it? While there is great potential in the squad that McGeeney has begun rebuilding this year, what appetite for the role will there be, given that:

No, it’s not an altogether enticing prospect.

Thank God heatwaves arrive with the same frequency as Kildare bring home the silverware. Mighty Kildaremen, what have you done?

This article first appeared on the Kildare Nationalist Sport website (December 11, 2020) By Richard Commins FOR me it was the stand-out moment in Johnny Byrne’s Kildare football career, which he ended with a five-word tweet on Thursday. “News reports would be correct” said the Allenwood and Coill Dubh dual … Read more

Article by Kildare GAA 365 founder Richard Commins which first appeared in the Kildare Nationalist (December 1st edition, 2020) At the weekend we heard of the decision of Tommy Moolick and Keith Cribbin to retire from intercounty football. In this week’s Kildare Nationalist we reflect on the careers of Tommy … Read more

It may have gone under the radar in the week Diarmuid Connolly retired and #Celbridgegate rattled on locally, but David Slattery’s low-key retirement from inter-county football was in keeping with how he played the game.   Not blessed perhaps with the natural talent of Connolly, Slattery was a footballer who … Read more

This article by Richard Commins first appeared in the Kildare Nationalist Has any other GAA player gone from playing with the county juniors in June to winning an All Star award within the space of four months? I’d be very surprised. Peter Kelly, the Two Mile House and Kildare stalwart, … Read more

This article by kildaregaa365.com founder Richard Commins first appeared in the Kildare Nationalist (June 2nd 2020 edition) and looks at the career of a man who divided opinion within the county, Martin Lynch.  SPORT is a game of opinions. For some maybe the opinions are the sport. Never more so … Read more

This article by kildaregaa365.com founder Richard Commins first appeared in the Kildare Nationalist (May 19th 2020 edition) and looks at the career of one of the most skillful footballers to play for the county, Niall Buckley.  In the days when we were allowed into pubs the debates would rage about … Read more

This article by kildaregaa365.com founder Richard Commins first appeared in the Kildare Nationalist (May 5th 2020 edition) and looks at three generations of Davy Daltons, hailing from Kilcock, focusing on the career of the middle Davy, who played 107 competitive games for Kildare between 1982 and 1998, winning an All … Read more