This article by kildaregaa365.com founder Richard Commins first appeared in the Kildare Nationalist (June 2nd 2020 edition) and looks at the career of a man who divided opinion within the county, Martin Lynch.

SPORT is a game of opinions. For some maybe the opinions are the sport.

Never more so than during these strange times when you can’t get out of bed without running into a Top 50 or Best Ever poll. We might have succumbed to one or two on these pages.

Of all the players to line out for Kildare in the past 50 years few have divided opinion more than Clane’s Martin Lynch. 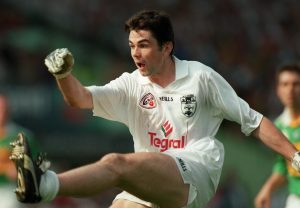 His clubmate Paul McLoughlin perhaps, he of the lazy gait but unerring boot. Or going back further, Gerry Power of Raheens, whose appearance as a sub drew roars and groans in roughly equal measures.

With Lynch, on the one side you had sublime skill and a lean, tall, athletic frame. Unmarkable when on his game. Fetcher, creator and finisher of priceless scores.

Another line was that Lynch was unpredictable. Unreliable. Tendency to go missing on the big day. Elements of truth in all of that, too.

With Lynch you truly never knew what was coming. I doubt he really knew himself.

In some ways his star burned brightly too soon. Pat Fitzgerald brought him into the senior set-up at 19 as a wing forward and in only his third match he plundered a hat-trick of goals against Mayo in Charlestown.

He wasn’t particularly prolific in the first couple of years, though, and Mick O’Dwyer saw the qualities of a rangy, athletic midfielder in the Clane man.

He wasn’t wrong and Lynch won an All Star in 1991 at the age of 21 in his first year as a midfielder at senior level, based on his progressively influential performances during the run to the league final. Lynch however, felt he played better in the following two years.

But it put a burden of expectation on the player. Lynch was a few years older than the Rainbows, Ryans and Buckleys but still relatively young to have such pressure heaped on his shoulders. What he really needed of course was a Tompkins or Fahy at his shoulder.

In retrospect, we supporters didn’t always help. There was no #BeKind movement in those days and mental health of sports stars was not something we thought much about. Shame on us. Martin’s ability almost became the stick we beat him with.

His demeanour on the pitch didn’t scream confidence either. Head bowed and lethargic looking when the day was going against him, as the big ones often did in those early O’Dwyer years.

Of course, the small days often go against Kildare too and without Lynch, it’s possible O’Dwyer would have been run out of the county for ever as early as 1993. The Wicklow debacle and Lynch’s rescue act should not be forgotten in charting the story that led to 1998.

Wicklow had never beaten Kildare in Croke Park but Kildare’s first half was an embarrassment to themselves and their famous trainer as they allowed their opponents build up a 2-7 to 0-4 half-time lead.

A frustrated O’Dwyer was as blunt as he could be: “keep playing like that and ye can forget about football for ever more”.

While it wasn’t quite in the same league as the Laois victory four years later, the comeback that followed gave a glimpse of a Kildare team with the guts everyone said were missing.

Johnny McDonald had been head and shoulders the best Kildare player in the first-half while his colleagues dillied and dallied, but after the break Glenn Ryan, Davy Dalton, Liam Miley and Lynch were among the most prominent who took O’Dwyer’s words to heart.

Lynch was the matchwinner, justifying his star billing with two exquisite goals. He kick-started the comeback three and a half minutes into the half, running through the Wicklow defence from 45 metres out, playing a messy one-two with Ryan and finishing with the outside of his left foot off the upright.

Kildare were level within seven more minutes of powerful football. But by the hour mark they’d allowed Wicklow to regain composure and a three-point lead. They still held it with four minutes left. Kildare were doing a Kildare.

Or were they? McDonald launched an attack and swung a fisted pass to Lynch just outside the large parallelogram on the left. With two Wicklow men hanging out of him he cut inside and while being swung off-balance unleashed a left footed shot into the top right-hand corner.

Wicklow had chances but not the composure to win it as Dermot Doyle and Niall Buckley points secured Lynch’s place in history.

The O’Dwyer train was still rolling but it was an almighty close escape in those pre-qualifier days.

While Kildare reached the final that year they underperformed against Dublin and the next three years would truly test the Clane man’s resolve.

First round defeats to Dublin, Louth and Laois saw the whole team hit “rock-bottom”, the project well and truly off the rails. According to Lynch, many of the team considered quitting that summer.

Of course, a few months later, O’Dwyer was back and the following summer we had Laois and the Meath saga. Lynch played a prominent role although he won’t remember fondly his early sending off along with McDonald against Laois. The provocation went unpunished as it often does but the indiscipline could have scuppered another O’Dwyer odyssey. His teammates dug him out.

Lynch was now in the full forward line as his career headed towards its Autumn years and he proved an adept target man. He scored a crucial goal the first day against Meath but ironically 1997 and 1998 were two of his lowest years in terms of scoring returns as he re-imagined himself as a provider for those around him.

In ’98 he was instrumental in the Leinster Final breakthrough against Meath, adeptly drawing fouls for frees which were meat and drink to Padraig Gravin, and of course sublimely laying on the winning goal for Bryan Murphy. 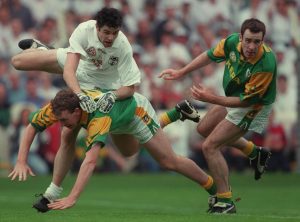 The goal wasn’t only about that final, glorious pass to the Cork man. Meath, belligerent as ever, had shaken off a three-point deficit with 14 men to level the game going into the last few minutes and it was a clear case of “oh no, not again” in the stands. Glenn Ryan’s head buried in his hands suggested a similar refrain down on the grass.

But where nerves normally jangled in white jerseys, these Lilywhites morphed into cold-blooded killers.

Christy Byrne saw Dermot Earley out near the Hogan sideline and belted the kick-out in that direction away from the mass in the middle. Earley won possession.

The next image is of Lynch making a darting run from in front of the Hill 16 goal. Earley can only have seen it in the corner of his eye, but his pass into the corner under the Nally Stand was perfect. Crucially two Meath defenders had drifted out with Lynch.

Lynch was as cold-eyed as Byrne and Earley had been with his delivery into clubmate Murphy, loitering with history on his mind in front of goal.

Martin was directly involved in 1-6 of Kildare’s 1-12 that day, despite the tight attentions of Donal Curtis.

His performance tailed off a little in the All Ireland semi-final against Kerry, with Barry O’Shea ignoring any social distancing guidelines that were around in those days. Still, a point in each half played their part in propelling Kildare towards the promised land.

Galway put Tomás Mannion on Lynch in the final and the early exchanges were relatively even with Lynch setting up Earley with a sublime pass that should have led to a point from the Sash man. His wide was typical of Kildare’s nervy start.

The common narrative on that final is that Mannion lorded it over Lynch for the seventy minutes but watch the video (if you dare). The first-half exchanges were 50/50 and the Clane man wasn’t as inconspicuous as some might recall.

He managed to briefly lose Mannion to contest a high ball on the edge of the square with Gary Fahy with the resultant punch giving McNamara some work to do in goal.

Minutes later Lynch was instrumental in Earley’s goal that should have kick-started Kildare’s day. A long Glenn Ryan ball found him hanging in the air above Mannion and Willie McCreery picked up the knock-down to supply Earley for the finish.

Lynch, though, lost a few successive tussles with Mannion in the run up to half time and the confidence seemed to ebb away. He wasn’t alone in his struggles with Gravin making little impression in the other corner but so much of the Lilies’ hopes were pinned on long balls into the number 13.

A miserable second half for team and player saw O’Dwyer forced to play the Murphy card in the 58th minute, having brought on Padraig Brennan earlier. Whether Lynch might have been re-deployed further out the field rather than in the dug-out is a valid debate but O’Dwyer had clearly seen enough as hopes of Sam ebbed away.

Martin was back at midfield by the time the 2000 Championship came around as O’Dwyer plugged a Niall Buckley-sized gap at midfield. Lynch was brilliant in the narrow opening round win against Louth and solid in the two clashes with Offaly where he flitted between midfield and full-forward.

Indeed, his performances remained consistently high throughout that Leinster campaign, without perhaps the personal headlines of his younger days.

Even as another All Ireland dream faded in the semi-final against Galway, Lynch was still hoovering up plenty of possession around midfield. The loss of clubmate John Finn to a harsh sending-off would be Kildare’s undoing along with the brilliance of Galway’s forward line.

The following year Lynch was involved in the Miracle of Newbridge as his goal helped launch a comeback to rival the earlier Wicklow one, this time against Donegal in the qualifiers. Sadly, Sligo put paid to that year’s efforts in Croke Park.

As 2002 arrived he decided that his fourteenth season would be his last. It was a year when he found his scoring boots, weighing in with the highest seasonal score of his career – 1 goal and 18 points.

Bizarrely his highest score since that Wicklow game nine years previously came in a game that only lasted 43 minutes for him. He was dismissed along with Clare full-back Pádraig Gallagher having already put 1-4 on the board that day in Newbridge.

Lynch made no impression on Paddy Christie in the Leinster Final of 2002 and was hooked ashore towards the end but he finished his county career with a blameless individual performance as Kerry brushed the Lilywhites aside in Thurles. O’Dwyer was gone and so was Lynch. 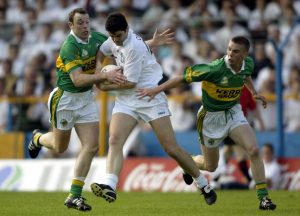 Of course, Lynch was a huge part of the Clane success story of the 1990’s winning four SFC titles in that decade. His father Pat was a Kerryman from Kells on the Ring of Kerry and moved to Clane to teach and he shares family links with the great Jack O’Shea. Martin’s grandfather John Lynch and Jack’s grandmother Bridget Lynch were siblings.

We always seem to be thanking Kerry folk for Kildare football successes.

At the end of the day Lynch’s career can only be judged a success. Back to those lists again but surely, he’d be in any Kildare Top XV of the last 50 years.