One of the stated aims of the Kildaregaa365 website is to provide a permanent record of the sport in the county.

Courtesy of the heroic efforts of @cilldaratimes, we’re now able to go one step further to meeting that goal.

@cilldaratimes has trawled through the archives to summarise the Championship record of every Kildare football who donned the white jersey in a senior inter-county championship for the last 30 years.

Having ourselves documented the year-by-results of the team from 1980 to date (See the Results section of the menu) we fully appreciate the effort that has gone into this work and we raise our white hat to the man.

Here is the summary picture then and it’s no surprise to see the legendary Johnny Doyle top both the appearance and scoring chart over that period of time. Possibly the greatest Kildare player of all time? (Let the debates begin..)

When you look at the club representation over time the dominance of Moorefield is the first striking aspect with neighbours Sarsfields not far behind. Between them the Newbridge giants have provided 31 of the 156 players to the team over the last 3 decades. 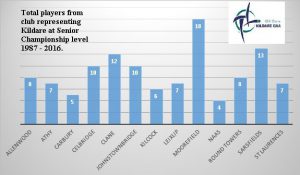 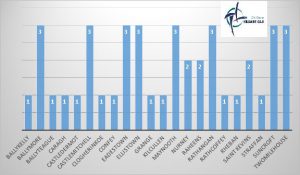 Clane, Johnstownbridge and Celbridge lead the charge while Doyle’s own Allenwood can be proud of their 8 representatives for a relatively small rural club. Some of the bigger town teams, such as Naas, Leixlip, Towers (of late) and Kilcullen fall into the “must do better” category, though Naas look set to thrive in the coming years given their underage successes this year.

The full table of Appearances and Scorers is set out below and has been permanently added to the Player Records Section in the main menu.

Again much appreciation for the efforts of @cilldaratimes