In the countdown to Cian O’Neill’s debut as Kildare football manager, a popular online fans forum ran a thread asking the question “What do you want from Kildare in 2016”. The responses ranged from scrapping the entire 2015 panel and starting afresh to winning back Sam.

A clear common theme that did emerge however is the desire for the senior team to avoid the kind of drubbings that underpinned any assessment of Jason Ryan’s spell in charge. In Kieran McGeeney’s six years in charge his team conceded more than two goals in only two competitive games – three against Down in a dead rubber league match and four against Dublin in a Leinster semi-final, both in his final year in charge. Ryan’s shorter two years at the helm saw Kildare concede more than two goals on no less than five occasions with the five and seven goal drubbings at the hands of Dublin and Kerry in this year’s championship ultimately rendering this position untenable despite reaching an All Ireland quarter final. 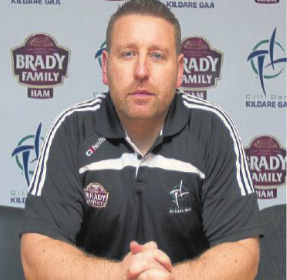 O’Neill himself focused on the need for competitiveness in his press conference with the local media before Christmas.

“One thing that I can guarantee this year is that we will be competitive; well-organised; there will be an attitude that the players will want to succeed; they will want to win. Where that takes them we’ll see as no more than Division 1, Division 3 is very competitive, but what I can assure you all is that every team that goes out will have a singular purpose and that is to win with Kildare.”.

He may wish to play up the opposition in the third tier but in reality a man of his stature in the game did not come back to his native county to manage in the lower reaches. His normal habitat in his coaching career has been Croke Park on All-Ireland Final day, whether it was with Tipperary hurlers or Mayo and Kerry footballers.  Getting out of Division 3 at the first attempt has to be a key component of the game plan. That’s just a pre-requisite and there won’t be too many slaps on the back for the Moorefield man if that is achieved come April.

The real litmus test as always will be the Championship and a relatively kind draw on the opposite side to Dublin, Laois and Meath hands O’Neill a perfect opportunity to bring Kildare back to a Leinster Final, something even the lauded McGeeney only managed once, all of seven years ago. None of the teams on the “weaker” side of the draw will operate higher than Division 3 in 2016.

So how does O’Neill bring Kildare back to competitiveness and avoid the sort of nightmare days out that Ryan endured against Dublin and Kerry (not to mention Galway in the “must-win” league game in Tuam that condemned them to relegation).  He is certainly having a good look at the available talent with 48 lads in the panel before Christmas and a welcoming hand shown to a number of players who have left the fold for various reasons in recent years.  Morgan O’Flaherty, Rob Kelly, David Hyland and Hugh McGrillen accepted the chance to come back in while Tomas O’Connor and Darroch Mulhall somewhat surprisingly declined the olive branch. Meanwhile only three of the panel who finished the championship will be unavailable to O’Neill : Hugh Lynch, a fringe player for much of his Kildare career has retired, Gary White is unavailable due to army duty and the promising Mick O’Grady has taken a year out to concentrate on his studies.

While 48 seems a huge number to have in training, O’Neill points out that up to 10 of them will be playing with their colleges in the O’Byrne Cup – the likes of Paul Cribbin, Fergal Conway, Tommy Moolick, Mark Sherry, Niall Kelly, Neil Flynn and Kevin Feely, while a similar number are carrying injuries of one sort or another that need to be managed carefully.

But it’s not just about finding new players and the idea of starting completely afresh is clearly nonsense. I would wager at least 10 of the 15 who started against Kerry in the Championship will be back in action when Wexford are the opposition at the quarter-final stage in June. Certainly it would be hard to see the likes of Mark Donnellan, Ollie Lyons, Eoin Doyle, Paul Cribbin, Tommy Moolick, Niall Kelly, Eoghan O’Flaherty and Alan Smith dislodged from the starting line-up.  Those most likely to stake a claim would appear to include Feely and Daniel Flynn (both of whom have turned their backs on professional codes), while Neil Flynn – ace free-taker with the under-21’s last year, Sarsfields forward Ray Cahill (player of the year in the local club championship) and perhaps Cian O’Donoghue, a pacy wing back who impressed in the O’Byrne Cup last year, might be wild cards.  If 4 or 5 more make a strong claim for a championship place it will give O’Neill plenty of options.

But almost as critical as the level of talent available will be the organisation and coaching that is available to the squad. One always felt under Ryan that Kildare lacked a real game plan, and certainly struggled defensively to contain most teams. The structure just never seemed to be there and reading the Jim McGuinness memoir lately it was striking not just how Donegal’s standing when he took the reigns in 2010 was similar to Kildare’s now, it was how much detail went into laying down playing structures and systems and how much real nitty-gritty coaching was still required for seasoned inter-county players to be successful.

Under Ryan it wasn’t just the likes of Dublin and Kerry (who could blow most teams apart) who rocked Kildare. Mid-tier teams Galway and Down also scored three goals against them last season and the Mournemen’s two goal smash and grab in injury time in Newbridge was an embarrassment for any defence and management, particularly coming just a year on from the similar collapse to Tyrone at the same venue. Defensively Kildare are rightly seen as vulnerable and naive. O’Neill needs to find a game plan to best utlise the players available to shore up that part of the pitch.

Off the park the back-room team assembled looks very impressive. With Bryan Murphy (also under -21 manager), Padraig Brennan and Brian Flanagan as his selectors and a strong back-up team, O’Neill is clearly taking the scientific, modern approach to the game that the top teams employ. You would expect nothing less from a man of his background.

Tomorrow in Newbridge, O’Neill takes his first baby-steps in management as his new charges take on DIT in the O’Byrne Cup at St. Conleth’s Park. He follows that with a Hawkfield encounter under lights against Louth on Wednesday and a tasty-looking tie away to Offaly in Tullamore on Sunday next. The Moorefield man has selected an experimental 15 as you would expect with so many players unavailable and his own club features strongly with four players drafted in. Goalkeeper Tom Corley comes back from the cold in goal while youngsters Liam Healy, Ryan Houlihan and Adam Tyrell are also named. Johnny Byrne, the county hurler, is also back after a couple of years away from county football and he takes up the problematic no. 6 position.  In midfield Matty Byrne earns his first county call-up after another strong year with Sarsfields while Athy’s James Eaton and Ballyteague’s Seamus Hanafin get another opportunity to stake a claim having had chances in this competition in previous years.

The O’Byrne Cup will not give us many answers as to where Kildare are headed under O’Neill. But he will look to get through to the semi-finals in order to get a game or two against stronger opposition (Dublin, Laois, Westmeath or Meath would be ideal) before going in against Westmeath in the opening league game.