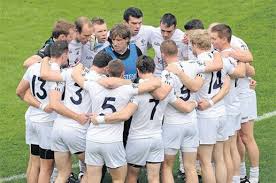 KILDARE footballers have a mouth-watering start to their NFL Division Two campaign in January with former manager Kieran McGeeney making his first return to St. Conleth’s Park since being forced out of his post in 2013.

The sides did of course clash in Croke Park in a Round Four Qualifier last year with Armagh coming out on top after a poor Kildare showing.

The two sides have arrived in Division Two from different directions with Kildare falling straight back down after one year in Division One while Armagh were promoted from Division Three earlier this year.

As Kildare seek to make an immediate return to the top flight, they’ve been handed a difficult fixture list with four away games (Cork, Fermanagh, Meath and Donegal) and they’ll be hoping to have secured promotion before a daunting trip to Donegal in their last game.

The hurlers meanwhile are also anxious to win promotion under a new manager to maintain the momentum Joe Quaid built up with the Christy Ring Cup success this summer. They have three out of five games at home in a Division that includes Donegal, Warwickshire, Derry, Wicklow and Down. They open against Donegal away on January 27th.

Fixtures are all available in our Fixtures section: