We’re onto the fourth of our Player of the Decade Polls this week and we go back to the 1980’s this time.

Of all of the five decades covered by these polls this was by far the most grim.

While the 1970’s was the “What Might Have Been” decade and the 1990’s and 2000’s both brought Leinster Title wins and final appearances the ’80s were just barren for Kildare.

Not winning Leinster is a bad enough decade but not even reaching a final?

Minimal underage success – a minor and under-21 double in 1983 and a second minor in 1987 were the sum total of silverware pickings.

We did operate for much of the decade around the upper echelons of the league and reached a semi-final (again in 1983) and a quarter final (1985) but the campaign-ending defeats in both years were utterly depressing with only six points scored in those two games. In 1983 Down beat us 1-9 to 0-4 in the semi final and the 4-6 to 0-2 hammering by Monaghan in the 1985 quarter final remains one of the most embarrassing days out I’ve had in Croke Park.

In Leinster we reached just four semi-finals in 10 years.  Offaly, Meath and Dublin were operating on a higher plane to us back then and we suffered comprehensive defeats to Offaly in Croke Park in 1980 (7 points) and 1983 (15 points) and Meath in 1985 (6 points). The only semi-final we were remotely competitive in was the 1982 semi final against Dublin in Navan when only four points separated the sides.

Laois hammered us in 1981 and 1984 Quarter Finals while Wexford ignominiously dumped us out in the First Round in 1986.

Offaly and the Dubs then ended our campaigns at the Quarter Final stage in 1988 and 1989.

You might question whether we should award a player of the decade at all !

But we did have some star performers during that time and we think we’ve selected a good shortlist of four stalwarts with a dose of controversy thrown in for good measure. 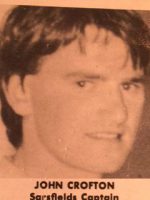 May be better known as a manager by some younger folk but Crofton was a long-serving all-rounder who made his debut in the O’Byrne Cup in 1976 and played in the All Ireland Under-21 Final v Kerry that same year. He didn’t hang up his inter-county boots until April 1993. The Sarsfields man captained his club for a number of years. He was primarily a tough-tackling and astute defender but was also deployed as a forward by a number of managers.

Despite having some injury problems, during the 1980’s he played 74 times in League and Championship for the Lilywhites scoring 4-17. For Sarsfields he won four county SFC titles as a player. Represented Leinster on a number of of occasions in the Railway Cup.

Sos made his Kildare debut in 1985 and soldiered with the county right up to the All Ireland Final of 1998 where he was given the unenviable task for tracking Galway flier Michael Donnellan. The Moorefield man was a dogged, tight-marking corner back or wing back. During the latter part of the 1980’s he was virtually an ever-present in the Kildare back-line making 39 appearances. Not renowned as a scoring machine (!) he scored 1-6 in all, his only green flag coming in the League against Donegal in 1987.

Like Crofton, Sos went on to become a manager and he was another to play for Leinster, winning a Railway Cup winners medal in 1987. 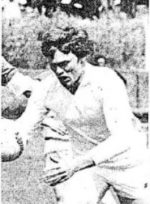 The red-haired younger brother of Eamon, Paddy O’Donoghue was of similar vintage to Crofton, and was full back on that under-21 team in 1976, graduating to the senior team in October of that year. Renowned as one of the country’s best full backs throughout his career he was adept at getting a hand to the ball ahead of his opponent and knocking the ball clear if he couldn’t catch it cleanly.

O’Donoghue also played at centre-back and midfield and even had a short spell at centre-forward as Kildare managers tried anything to get the team out of the doldrums. He played on until the famous Leinster defeat to Louth in Drogheda in 1991. He made 84 appearances in the ’80’s scoring the grand total of 0-3. Won 3 Kildare SFC titles during Johnstownbridge’s glory days of the ’80s and was another to win Leinster recognition on a regular basis. 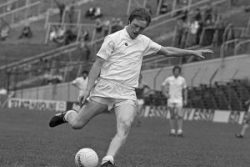 Tompkins inclusion will divide opinion no doubt but he was on board with Kildare from his debut in October 1980 to his unfortunate falling out with the County Board over an airfare expense in 1985 he was among the top forward talents within the game and arguably Kildare’s most important player. Certainly their talisman. Played his first game while still a minor. An accomplished free-taker from underage level upwards and a top-notch goalscorer, Tompkins made 42 appearances scoring 7-155 for an average of over 4 points a game at senior level for Kildare. Had a half-decent career with Cork afterwards.

It's Week 4 of our Kildare Player of the Decade Polls and we're going back to the 1980's. In truth an awfully grim period for Kildare football but we still had some outstanding talents during that decade. A little bit of controversy around one of the included players…