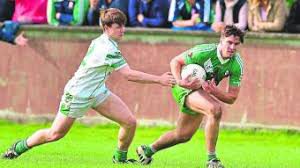 A recent conversation on social media centred on whether clubs such as Celbridge, Athy and Johnstownbridge with their plethora of inter-county players at the moment should be stronger favourites for the County title than the Newbridge duo of Sarsfields and Moorefield. Ben McCormack was the only player from the green and white giants to make a championship start this summer while the other three were well-represented in the games that mattered.

A counter-argument would be that re-integrating county stars could be damaging to the cohesion of a club team and therefore counter-productive.

We took a look at whether there’s been much correlation between county representation and county titles over the last 30 years.

The table below analyses over those three decades: 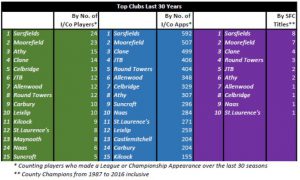 Some highlights that jump out from the analysis:

So what does this mean for the 2017 county title? Who would you back?

Looking at the competitive appearances by their players in 2017, Johnstownbridge are top with 43, Athy 39, Celbridge 37, Sarsfields 20, Naas 20. All are still in the running. I have to say my gut feeling would be that Celbridge, with their sprinkling of stardust and boosted by Paddy Brophy’s return, allied to a group of very solid club players, would be a good bet but it would be interesting to see if Johnstownbridge can prove the correlation theory and take home their first title since 1989. The Newbridge clubs with their strong recent history and strength in depth will have a thing or two to say about that!

Moving on from the correlation between county players and club performance, other notable facts emerged from our compilation of the last 30 years of player appearances (available here).