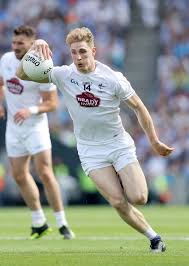 While the spirit was better, the outcome was familiar.

Kildare will play Division Two football again next year and that’s their rightful level on all evidence this spring.

Six games is a long enough examination of a team’s credentials and the Lilywhites have now been comfortably dispatched by the three best teams in the country while failing to edge three Ulster teams that they might have hoped to take points off. The table doesn’t lie.

There’s a sense of opportunity lost though. A feeling that the management team have suffered a collective failure of imagination, their conservatism preventing a fuller exploration of the capabilities of the panel available.

Tight defending has been anathema to this group for five years or more and if ever the time was ripe to try some new faces, or even the same faces in different positions, tonight was surely it. To go with essentially the same crew that were torn apart by Mayo and effectively downed tools after half-time was a damning indictment of the remaining panel members by management.

David Hyland was given the roasting of his life by Andy Moran six days previously. Earlier in the campaign Bernard Brogan took him to the cleaners in Croke Park. Hyland is a good player, but he is surely better suited to a half-back position. Was it fair to hand him the no.3 jersey once more with Paul Geaney ominously lining out at 14 for Kerry?

With James Murray brought into the panel after an outstanding year with Moorefield, surely he should have been in contention to come into the half-back line with Cian O’Donoghue ruled out?  Nope – none of the Moorefield contingent were in the match-day panel.

And so with the same approach we had the familiar outcome. Once Kerry got up a head of steam they were able to pick off points with familar ease, each of their six forwards making their mark on the scoresheet before half-time as they opened up a comfortable lead with a powerful second quarter performance.

Geaney and the exciting teenager David Clifford were too good for Hyland and Mick O’Grady, first to the ball and able to take their points when they got it.

Kildare to be fair, tackled harder and were more energetic than against Mayo, and in Keith Cribbin they had a workaholic all-rounder supplementing the half-back line to much greater effect than in Newbridge before a black card curtailed his involvement on 47 minutes.

Kildare also had, arguably, the best forward on the pitch in Daniel Flynn. The Johnstownbridge man had a nightmare with his shooting last week, but here he gave a masterful full forward display, landing six points from play and proving a constant thorn in Kerry’s side.

The away team remain somewhat one-dimensional in attack though, despite improved performances from Paddy Brophy and Niall Kelly.

Brophy too had his evening shortened by a black-card for an impetuous foot-trip. With Kevin Feely off injured and Cribbin already gone at that stage, it was the sort of rash decision that Kildare players seem destined to repeat ad nauseum.

While their commitment and resilience moved up a notch on the Mayo match, their technical deficiencies surfaced once more. Poor passing & shooting in particular were to the fore once more, although they were less liable to bring the ball into contact.

The game was end-to-end most of the way through, and Kildare were never going to win a shoot-out.

After a bright start that yielded nothing on the scoreboard, they watched Billy Joe Keane open Kerry’s account on 5 minutes.

Kildare got into their stride though. Feely noticeably eschewed the chance to knock a 7th minute free over the bar and instead played it short and kicked over from play. The Athyman’s confidence seems to be waning as the year goes on. He’d have kicked that free without a second thought a year ago.

Feely’s midfield partner Tommy Moolick put Kildare ahead and then Kelly finished off a good spell for the away team to make it 0-3 to 0-1.

Kerry, though were soon troubling the Kildare defence and within two minutes they’d taken the lead with points from Micheál Burns, Geaney from a free and Clifford.

Kerry took over though for the game’s crucial 15 minute spell and recorded seven points without reply to effectively kill off the game. The excellent Kevin McCarthy scored two, Clifford pointed two frees and Geaney, Paul Murphy and Daithi Casey were also on target as any confidence Kildare had ebbed away.

Kildare had hit seven wides in the first-half, the worst from Brophy and Kelly, before Flynn, the focal point of their forward line, ballooned a long-range effort towards the right hand upright three minutes before half-time. The ball surely veered to the outside of the upright by a good metre but was remarkably flagged good by the umpire.

Kildare went in 0-11 to 0-5 in arrears.  The Lilies had lost the influential Feely to a serious-looking ankle injury on 27 minutes though.

Cian O’Neill did try a new trick by sending them out first after the break and although Geaney split the posts from play straight away to stretch the lead, Kildare upped their game in the third quarter and made it competitive.

Flynn came into his own in this period, tormenting Foley, but with very little support. He reeled off three points in a six minute spell with Ben McCormack also on target. Keane managed a sole reply for Kerry and the lead was back to four points.

Cribbin’s black card was followed by an excellent Brophy point but after another Clifford free, the Celbridge man received his marching orders. Kildare were having to empty the bench and unfortunately there was little positive impact.

As if to illustrate the difference, Kerry were able to send David Moran into the fray and he fired over an inspirational point to stretch the lead further.

It was tit-for-tat pretty much from there to the end with Flynn and Fionn Dowling points getting Kildare back to within four but they never threated the goal that might have made things really interesting. Awful wides from Kelly and Paul Cribbin were soul-destroying in this period.

Meanwhile Kildare’s defence were giving away frees at the other end and Clifford was supremely confident and accurate in accepting the gifts.

Peter Kelly and Mick O’Grady pushed forward for late points for Kildare but it was fairly academic.

So we’re left with a sense of an opportunity lost. Not on this night in particular, but over the six games to date.

If staying in Division One was not a big enough goal in itself, what must the management have sought to achieve in the league?

Overall you’re left with an overwhelming sense that this team has reached a ceiling and it’s management doesn’t have the nous or skills to bring the group to a higher standard.

If Division One is a testing ground, we’ve flunked badly and collectively.

Mark Donnellan – 6 – Solid display. Kick outs no better than average but strong under the high ball. A couple of sorties out the field sent hearts fluttering.

Peter Kelly – 6 – Defended tigerishly on Barry John Keane and generally did ok. Got forward for another score.

David Hyland – 5 – Geaney got the better of him but not to the same effect as Andy Moran had the week previously.

Mick O’Grady – 5 – Clifford too hot to handle. Did manage a rare score late on.

Jonathan Byrne –4 – Not involved enough and lack of pace is problematic against a free-running Kerry.

Eoin Doyle – 7 – Better from the captain this week. Held the line better and cut out the mistakes from last week. Distribution good.

Kevin Flynn – 5 – Struggled to replicate his Mayo performance and found Micheál Burns hard to handle. Very little he tried came off as evidenced by a point effort that rebounded off the post.

Kevin Feely – 6 –  Worrying injury picked up in the first half. Confidence in his free-taking seems to be waning as he elected to go short rather than kick on occasion, although he did work one score from such a situation.

Tommy Moolick – 6 – Battled gamely as usual before running out of steam.

Keith Cribbin – 8 – Whole-hearted display covering between midfield and centre-back. Covered an exceptional amount of ground and one block on his ’45 was inspirational. Passing let him down at times but fifteen players giving this level of commitment would be unbeatable.

Paddy Brophy – 7 – Was giving his best display of the season before an unnecessary black card cut his day short. One sublime point but a bad miss as well. Could see the fitness returning with this outing and easier to understand why Cian O’Neill sees his value out the field rather than closer to goal.

Ben McCormack – 6 – Still scrambling around in search of form. One good point but inconsistent.

Daniel Flynn – 9 – Outstanding display, possibly his most impressive in a Kildare jersey. Was simply unplayable. Pace, power and found his shooting boots to strike six points from play (even if one was surely wide). Roasted Kerry full-back Jason Foley.

Niall Kelly – 7 – noticeably more involved than of late and seemed to be up for the physical battle. Got on a lot of ball and while not everything came off he kept at it to the end. One good point, but also fluffed a couple. Shooting has been a problem this season to date.

David Slattery – 5 – one good mark but not impactful enough.

Fionn Dowling – 5 – another point-scoring substitute appearance for the Suncroft man but not very involved.