We loved this post from user Whiteknight on the Kildare GAA Fans Forum and he’s kindly let us post it here.

Kiltoom in early January is a long way from Croke Park in the summer.
Challenge games early in the year appeal to the senses in ways a big Championship match never can. Everything seems to run slower and clearer. You smell, hear and see things that get lost in the buzz of a big game.

The pitch in Kiltoom is down a small country road just off the N61 coming out of Athlone. An old black dog protected the cottage that I tried to park beside down the road from the pitch. He eyeballed me as I tried a number of times to manoeuvre my car alongside his house, never giving me an inch. “We don’t see many KE cars around these parts” Shep seemed to say.

The smell of turf fires from the cottages accompanied me on the short walk to the pitch. A well-kept grounds surrounded by trees and two small stands. The home of the mighty Bridgids. The pitch was two tone. One side of the field basked in a brilliant winter sun and looked perfect for ball. The other half was hidden in shadow behind the trees and the little stand – it crunched with white frost and leaves. The crowd was mostly Rossies and mostly men. I guess they left their women shopping in Athlone while they blew off the cobwebs and got their first fix for the year. “Murtagh has a big year in him”. Many of them took the kids and they raced up and down the small terrace in their new Christmas kicks.

These types of games give you a good insight into the backroom teams. Roli Sweeney never looked fitter and it was interesting to see the respect he already seems to command. The Kildare lads seemed to actually listen to his instructions rather than nod their head and stare blankly into space. I could hear Kevin McStay issue his instructions to his new starter. “Keep it simple like in training and work fucking hard”
Hope always springs eternal for these two counties and they both had strong line ups. Not many counties would begrudge the Rossies or the Lilies a big win. Perhaps that’s an issue.

The first half was what you would expect from teams blowing out the Christmas pints. (I hope to god they were allowed Christmas pints). There were plenty of nice touches and scores but also plenty of wild shots and balls dropped short. Kevin Feely screamed at himself “what the fuck?” after an easy miss.
Ben McCormack, Con Kavanagh and Conor Hartley started in the forward. They buzzed with enthusiasm but will hope for better days. Senior intercounty is just another step up from senior club and county under age. That split second you used to have is not there and the corner back invariably gets the hand in. Ben McCormack at one stage overcompensated with a ball he initially won well, tight in the corner. He shaped to go outside but in his eagerness to cut back in along the end line, he left the ball behind him. All the supporters said nerves, the lad looked furious with himself. He’ll be given the chance in future to show where his mind’s eye saw him going.

The old dogs prospered in the first half. None more than the warrior that is Sean McDermott of Roscommon. He probably had the most mileage on the clock out of all players on the field but his terrier like demeanour and assuredness on the ball saw him as the Rossies best contributor. Unlike our new lads he’d done plenty of days like this before.

Dan Flynn at no.14 once again was the white booted, great white hope. Sometimes unplayable and at all times effective he kicked four first half points from play, added two more in the second and won a number of frees as well. He has a directness and speed when on the ball that is different to anything else I have seen from a Kildare forward. At times it looks like his mind is working even faster than those bursting thighs and sometimes that sees him taking wild shots or running head down into corners but he’s worth persisting with in there as he adds a punch that Kildare otherwise could not deliver. Kildare were up by a couple of points at half time and were good value for it.

The second half saw a rise in tempo and a few big hits that brought the crowd into it a little more. The blood started pumping in the players as the competitive instincts re-awoke. I’d imagine they began to enjoy the game and the air in their lungs. The gains obtained from nights in the gym pre-Christmas now being shown with a few thunderous shoulders. Paul Cribben kicked two magnificent soaring points although one was touch and go. There are no official white coated umpires on the second day of the year and I am pretty sure the clubman behind the posts had his phone in his hands when Cribben’s latter effort got the green light.

Subs were running in at regular intervals as management took the chance to give their full panels a spin. Shane McNamara came on and hit fellow sub Fergal Conway with a pinpoint kickout to right half forward for a beautiful mark. Cian O’Neill smiled the smile of a man who had the whole world on a string after that sequence of play. As for the mark – lets reserve judgement. It did not have a huge bearing on the game with most ball broken when the game was tight. When the players tired we saw a handful of fetches but they were mostly uncontested. The glory days of catch and kick might be a while away yet.

Roscommon pegged the Lilies back and entering the last few minutes they were now up by a couple of points. Cometh the hour, cometh the man however and Eoin Doyle burst up the field from center back, collected a pinpoint Neil Flynn pass and slid it under the keeper. Flynn then bookmarked his impressive display with an insurance point.
Kildare 1-16 Roscommon 1-13.

Shep had retreated to his living room window when I got back to the car. The road would be soon clear of strange cars and faces. He won’t see the likes of them again this year. He heard them talk about bigger days ahead, meetings with Mayo and Dublin perhaps in the summer.
“God love them” thought the old dog. 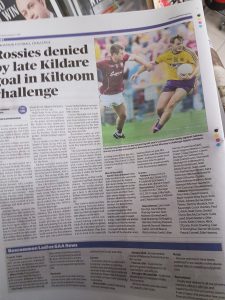