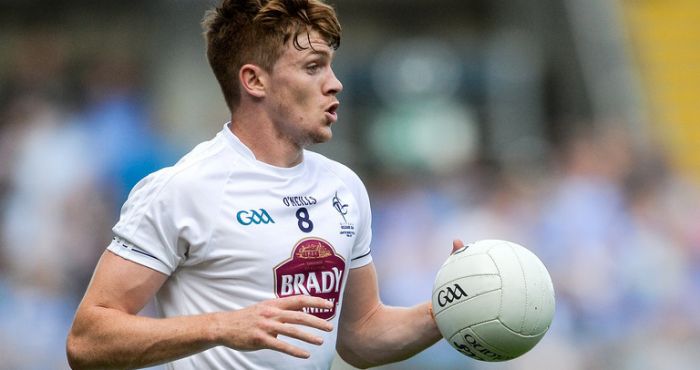 Mark Donnellan 6 – seemed a little less assured than of late. Almost got caught in the first-half when saving a high dropping ball with his feet. Maybe was unsighted. A ball over the sideline when calm was needed late on.

Mark Dempsey 6  – the full-back line generally did okay and Dempsey looked a little more assured than during the league. Something to build on although opposition was poor in attack.

Mark Hyland 6 – thought it strange for him to pick up the tall and powerful McGraynor but the younger Hyland acquitted himself quite well.

Peter Kelly 5 – average enough game. Half back line struggled in second half and failed to provide any real over-lap all through.

Eoin Doyle 6 – considering he was a hamstring doubt he played well enough. Caught one magnificent mark in the second half.

* Kevin Feely 7.5 – excellent fielding all through but is not contributing much to our attacking play, unlike when he first came back from England. Man of the match nonetheless.

Fergal Conway 7 –  probably the best partner for Feely at the moment. Conway wasn’t always subtle in his forward drives but he was physical and whole-hearted.

David Slattery 5 – very poor. Earned little possession and did little with it when he got it. Had one effort saved.

Adam Tyrrell 7  – decent outing and justified his selection I thought. Bizarre that he was substituted at all, let alone while he was taking a free-kick!

Eoghan O’Flaherty 6 – after a poor outing for Carbury against Johnstownbridge this was better. Won some good possession, was accurate. Standard of opposition helped of course.

Ben McCormack 6 – scored two and seemed lively early on but his handling and execution was rusty, perhaps not surprising given his lay off.

Paddy Brophy 6 – needs to get re-shod but I wasn’t as negative about his performance as some. Thought he looked pacier than we’ve seen lately and certainly burned the full-back for his point early on. Not as good after the break but that could be said of the lot of them.

Jimmy Hyland 5 – you can blame the balls in perhaps but he seemed suffocated with the close marking Wicklow men who seemed to have targeted him. He’ll have to get used to that and play his way into scoring positions. Tough first senior championship match and a rare non-scoring appearance.

Cian O’Donoghue 5 – Thought he might have started but didn’t impress when he came on. One turnover near the end could have been costly.

Neil Flynn 5 –  Spared management’s blushes by replicated Tyrrell’s free conversion, but not very influential beyond that as Kildare crawled into their shell.