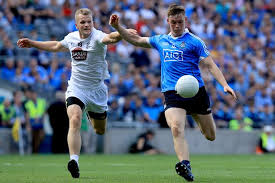 Well you just knew it would happen.

For the FOURTEENTH competitive game in succession Dublin will have home advantage over Kildare when the teams kick off the National Football League as part of a double-header in Croke Park on Saturday 27th January.

Apparently the fixtures were pre-ordained, however, as Kildare took on Cavan’s reverse fixtures from last year.

Kildare do however have 4 home fixtures during the campaign with Monaghan, Tyrone, Mayo and Galway coming to Newbridge.

There’s scope for a couple of nice weekends away in Donegal and Kerry with the Paddy’s week end trip to the Kingdom looking very appealing.

Hurling hurlers meanwhile start their campaign at home to Christy Ring Champions from 2016, Meath on Sunday 27th January. After a progressive campaign last season the hurlers will operate in Division 2A of the National Hurling league. Kildare’s only other home game is against Kerry while they face tricky away assignments to Westmeath, Carlow and London.