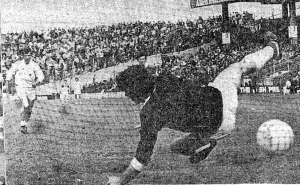 Those of a nervous disposition may want to look away.  We’ve uploaded all of the results and scorers from Kildare’s Senior Football “efforts” throughout the 1980’s.

While the Lilies spent plenty of time around the upper reaches of the National League, their Championship efforts in those pre-qualifier days were grim to say the least.

Not once did Kildare reach a Leinster Final and they suffered some humiliating defeats such as Laois’s 10 point win over their neighbours in Tullamore in 1981, a 15 point tonking by Offaly in 1983 and an ingnominious loss to Wexford in the first round in 1986.

You might also not want to re-live the 4-6 to 0-2 NFL Quarter Final disaster at the hands of Monaghan in 1985.

On a more positive note Kildare landed O’Byrne Cups in 1982, beating Dublin en route, and in 1989 when all-conquering Meath were beaten in the Final.

In the league a 1984 six point defeat of Kerry in Athy in Division 1 of the League lives in this author’s memory, as does the scoring exploits of Larry Tompkins in the first half of the decade and Paul McLoughlin in the second half.

In 1988 Martin Lynch introduced himself to the senior stage with a notable hat-trick in the NFL against Mayo in Charlestown. Lynch still managed to finish on the losing team on a scoreline of 4-2 to 2-9.

The results can be viewed here:   http://kildaregaa365.com/index.php/kildare-senior-football-match-results/