At the weekend we heard of the decision of Tommy Moolick and Keith Cribbin to retire from intercounty football. In this week’s Kildare Nationalist we reflect on the careers of Tommy and Keith and we pay tribute to both for their great service to the county.

TOMMY Moolick first caught my eye with the Kildare minors in 2009. 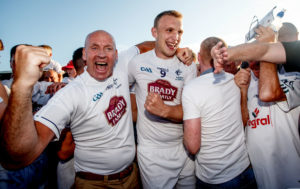 In that team it tended to be Paul Cribbin who grabbed the attention and the 23rd May 2009 would prove to be no different as he grabbed two goals in Kildare minors’ massacre of Wexford. Cribbin already had a big reputation but I remember being taken with the midfield performance of the lad from Leixlip that day.

On looking it up, I can see Tommy Moolick scored 1-3 in that win and I remember him popping up all over the pitch. That performance encapsulated what he would give to Kildare for more than a decade.

He could score goals and he would almost guarantee a long-range point a game. But above all, he would cover ground and his colleagues could rely on him being there when he was needed. As honest as the day is long. It is somewhat bemusing that a lack of ‘mobility’ was a stick used to beat him with when he could appear anywhere during the 70 minutes.

It would be more accurate to say he was not blessed with pace off the mark but when he started out that was not a prerequisite for every outfield player as it seems to be now.

Kildare would reach the Leinster Minor final that year but lost in a replay to Dublin before gaining revenge in the following year’s four-game saga, with Moolick now at centre-back. Longford caught a tired side on the hop in the semi-final.

By the time Moolick lifted the Leinster under-21 trophy as captain and midfielder with that same talented group of players in 2013, he already had 10 senior appearances behind him, having been called into Kieran McGeeney’s set up at 18.

Moolick became a regular under Jason Ryan and made his senior championship debut against Louth in 2014, scoring the obligatory point, and his rocket of a goal against Down in the All Ireland qualifier in Newry later that summer will be fondly remembered by Kildare supporters.

He went on to make 98 appearances in all competitions in the Kildare engine room, scoring an impressive 10-56 in the process. He was his club’s only representative on the county team throughout that time.

His county retirement at the age of 28, after a season in which he struggled to work his way into Jack O’Connor’s plans, is perhaps an indictment of the way Gaelic football has gone, but Leixlip will at least benefit from a good few more years with Tommy anchoring their midfield as they seek to regain senior status.

KEITH Cribbin announced his retirement a couple of days after Tommy Moolick and the two shared the distinction of being called into Kildare senior panels by Kieran McGeeney at the age of 18. Both also needed something of a second coming before establishing themselves. 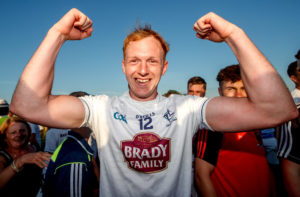 The elder of the two Cribbin’s was from good lineage. On his mother’s side his grandfather was Larry McGuinness from Nobber, who won an All-Ireland with Meath in 1949. His paternal grandfather, Billy Cribbin, won a Leinster minor medal with Kildare.

It always seemed to be brother Paul who was earmarked for success, although Keith was influential in midfield for the St. Mary’s Edenderry team that won the All-Ireland Schools B title in 2007. He marked a certain Michael Murphy on the St. Eunan’s Letterkenny side.

Cribbin was introduced as a substitute against Laois in the game that confirmed Kildare’s relegation from Division One in March 2008 but it was real eye-opener when the carrot-topped Johnstownbridge man was named at corner forward for the opening championship match against Wicklow that summer. In Croke Park no less.

That Wicklow game was a disastrous outing, both for Keith and Kildare as Wicklow shocked McGeeney’s side and recorded their first ever win in Croke Park. He was not ready and it was 2010 before he appeared again, now converted to a wing back for the league campaign. He made four championship appearances that year, three as sub, as Kildare came through the qualifiers to the All- Ireland semi-final.

Cribbin shifted between backs and forwards in 2011 but felt that he had gone off the boil and travelled to Australia in 2012. It would be 2014 before he would pull on a senior jersey again but having played minor and under-21 in unsuccessful Kildare teams, he was influential on the Junior team that reached the All-Ireland final in 2013, scoring a goal in that final against Cork.

Jason Ryan brought him back into the senior fold for the league game with Dublin in 2014 and he became a regular under him and later Cian O’Neill, often lining out at wing-forward but with a roving and defensive brief. Cribbin’s pace and tenacity were serious assets as was his fitness level.

He struggled to win favour under Jack O’Connor though, making only two starts in the league and his final appearance would come, like Moolick, as a sub against Cavan.

Cribbin lined out 98 times in all for Kildare seniors, the same as Moolick ironically, in all competitions, scoring 3-24.