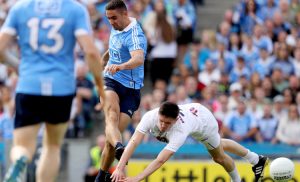 What to think? I went into it convincing myself that anything under a ten point gap would be a measure of success for a developing Kildare side. An uncomfortable attitude for a Leinster final considering it’s been eight years since we sampled one and seventeen since we won one.

Almost 24 hours later, a re-watch (ok, two) and still struggling to process it rationally. Would hate to be a journalist trying to make sense of it in time for a Sunday night deadline.

Let’s start with the positives before getting into the nagging doubts:

Plenty there to build on for Cian O’Neill and the management team. Importantly psychologically to have stood our ground and matched Dublin on the scoreboard for the final hour of the game including injury time. With promotion to Division One in the bag and comprehensive statements of superiority over Laois and Meath behind us, this was always going to be as much about holding on to that feel good factor as about annexing an unlikely Leinster title. Some Lilies will baulk at that “defeatist” approach but rationally that’s where we are at. And by and large it was therefore “job done”.

Now to the negatives. We could have done a whole lot better in a few areas and for all the progress made these are largely not new issues for Kildare football:

With rumours of Doyle’s broken thumb emanating from Naas from the middle of the week all eyes were on the team captain in the warm-up. Joy at seeing him emerge from the tunnel soon dissipated quickly as he seemed unable or reluctant to touch the ball with his injured left hand. I was convinced his appearance was merely a tactical ruse and that he wouldn’t start but sure enough he went through the normal captain’s duties and – shades of Glenn Ryan in ’98 – it became clear that our no.6 was going to battle through the pain barrier.

The match programme further dampened the enthusiasm as it became clear that Neil Flynn was unavailable to come off the bench with another hamstring strain the reported issue.

Kildare started well though with Flynn taking an early pass from Slattery and slicing one over the bar at the Davin End after only 21 seconds. Kildare looked hungry and Moolick won possession from Cluxton’s first kick out before wandering into the edge of the square in time to pluck Doyle’s high ball from the air for an early goal chance. Sadly he didn’t connect well and both his tame effort and Cathal McNally’s follow-up were smothered by the alert McCarthy.

Paul Mannion, who never reached the heights of his Westmeath tour-de-force settled Dublin with a point from the right hand side and although Feely secured an uplifting mark and Keith Cribbin followed it with a second, Kildare’s attack was looking cumbersome and Dublin began to go through the gears. By the 9th minute they were 0-3 to 0-1 ahead with Ciaran Kilkenny shrugging off Cribbin and then Con O’Callaghan getting his dream day off to a start with a point off Donnellan’s fingertips. Meanwhile McNally had followed Conway with a shot dropped short into Cluxton.

The ghost of Leinster Finals past revisited Kildare in the next two minutes as Dublin looked to have killed off the game with two quick-fire goals. The ease with which Kilkenny opened up the Kildare defence to put Rock in the clear for the first goal was matched by the calmness of the low finish inside the left hand post. Cribbin was the closest (a relative term) to the Dublin forward with the full back line gone AWOL.

Soon James McCarthy was playing a 1/2 with O’Callaghan on the left and could probably have stopped for a few selfies at the front of the Nally Stand before edging across the face of the Kildare goal and side footing home under little pressure.

In the blink of an eye Dublin had eased eight points clear and Kildare looked set for a pasting to rival the 2013 and 2015 ones. Nothing had changed it seemed. Game over with an hour to go.

A scrappy period followed as Kildare gasped for air and Dublin became uncharacteristically wasteful for the only period of the game. Jack McCaffrey, Fenton, Rock and Kilkenny all blazed wide to grant Kildare a reprieve during the seven minute gap before their next score. Eventually on 18 minutes McCarthy buried the in-rushing Flynn with a crushing shoulder and Dublin went straight down to the Hill end for O’Callaghan to fire over his second. Dublin had reached the spread already (9 points).

The Lilies shook themselves though and between that point and half-time they’d outscore Dublin by 0-9 to 0-4 to make a game of it.

McNally started the recovery from 21 metres after taking a pass from Brophy before a jet-powered Cribbin raced through the Dublin cover to fire over from a central position. A goal might have been on but the Johnstownbridge man played the percentages.

On 23 minutes Rock needlessly grabbed Mick O’Grady’s leg to prevent the Celbridge man from getting up with the ball and the Ballymun man was gone on a black-card. If Kildare fans thought that was a seismic loss given his free-taking role they would learn otherwise pretty quickly. If anything Dublin were strengthened by the introduction of a rejuvenated Bernard Brogan while the cool-as-ice O’Callaghan proceeded to shoot the lights out from play and placed balls in his first Leinster final, finishing with a remarkable 12 points.

Kildare were warming to their task though with the likes of Slattery and Cribbin making inroads and they narrowed the scoreboard further with their third and fourth points on the trot as Dublin went eight minutes without a score. Niall Kelly, playing well within himself unfortunately for the second game running, won a free which Feely despatched and then McNally notched his second from out on the left.

The challengers had edged within five points and it was largely tit-for-tat from here to half time with the game flowing nicely and brewing into a really competitive contest.

O’Callaghan opened his free-taking account on 26 minutes before Byrne ventured forward to score a sweetly struck point with his left foot. Brogan then evaded Ollie Lyons for the first time but unfortunately not the last and effortlessly stroked over his first of five points. Cribbin then set up Brophy for his first point before O’Callaghan again stretched it to six points with another free.

Arguably the moment of the game – from a Kildare point of view at least – arrived two minutes from half time when Flynn showed all of his raw power and pace under the Hogan Stand to keep the ball in play around midfield. He breezed past Fenton at speed before audaciously unleashing a sliced effort straight between the posts from out near the sideline. Brilliant improvisation.

The gap was down to four shortly afterwards when Slattery punctured the Dublin defence once more to point.

Brogan and Feely swapped injury time points and the game was surprisingly very much on the boil as they went in at half time to loud applause. Finally a competitive Leinster Final.

Kildare had to be dragged out by the fourth official after the half time break as Dublin waited impatiently for the Lilies to complete the running repairs. No changes were made by O’Neill with Conway in particular being given time to regain his normal form. It didn’t happen and perhaps Paul Cribbin could have been introduced at that juncture. As it was he appeared ten minutes later when the damage was done. Not that Conway alone was at fault – it was just one of those leaden-footed days that can afflict any player.

An early score or two would have really put this in the melting pot but Dublin don’t do fairytales and Kildare didn’t help themselves either. An unnecessary prod into the back of Philly McMahon by Doyle handed O’Callaghan an easy opening point of the second period and while Kelly finished off a lovely passing move with his only score of the game, Dublin moved into overdrive, outscoring Kildare 0-8 to 0-1 to kill the game between the 39th and 52nd minutes. Brogan notched three sublime efforts from play, O’Callaghan added three more to his tally and Paddy Andrews and Kilkenny were also on target with Dublin at their clinical best. Feely provided the lone reply with a free after Kelly was fouled.

Kildare had squandered a game-changing opportunity when only six behind in the 41st minute though. Slattery, elusive as ever, finished off a meandering run with a perceptive pop-pass to Flynn who was in the clear and bearing down on Cluxton’s goal. A cooler head would have rolled it low. Jamie Clarke would have stopped for a quick cuppa and switched to soccer mode before dribbling around the keeper. Sadly Flynn did neither and his shot was at a perfect height and close enough for Cluxton to enhance his reputation further. If that’s possible.

As if to ram home the importance of that miss Dublin went up the other end and scored through Andrews. Kildare had gone from a possible 3 points gap to 7 in the blink of an eye and in truth the game was now truly up.

Benches emptied and scores were swapped as the game veered towards its end. The points spread kept it interesting and it would have been easy for Kildare to drift to a 15 point defeat or worse. Thankfully they didn’t and that’s important psychologically as they regroup over the next two weeks.

As the game entered injury time the spread was back at 9 points with scores from substitute Shane Carthy and two more from O’Callaghan while frees from Feely (2) and Brophy along with one from each from play from Fionn Dowling and the hard-working Brophy kept Kildare very competitive on the scoreboard.

Substitute Brian Howard and yet another from O’Callaghan pushed Dublin eleven ahead in stoppage time before Kildare got just rewards for their efforts. In entirely different circumstances to his early goal at the same end in the 2013 semi-final, Brophy was on hand to elegantly take a Callaghan high ball over the head of Michael Fitzsimons before applying the sort of low, soft finish that Flynn could only dream of.

Fittingly O’Callaghan finished the scoring with his sixth free as Dublin proved the bookies right with a nine point finishing margin.

We now know that Kildare are facing into a last 12 encounter with Kieran McGeeney’s Armagh in two week’s time. It just had to be so! Unfortunately three dark clouds hang on the horizon as O’Neill and his management team regroup:

Those worries are for another day. Right now it’s good to know we have a team again. Despite the reservations we can at least take that from yesterday.

Attendance: 66,734 (although initially announced as 66,666 before Beelzebub was clearly thwarted by some Dublin supporters falling belatedly out of the local establishments)