Minors in Good Shape against Longford 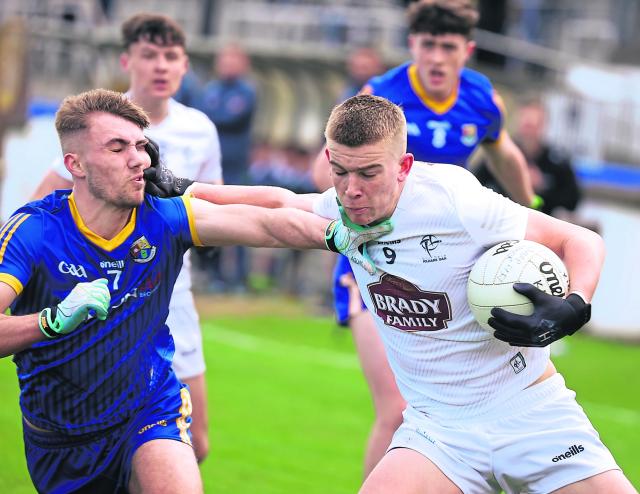 Kildare’s minor footballers are sitting pretty with two wins out of two in Group 2 of the Electric Ireland Leinster Minor Football Championship. With a game to come against Meath later this month Niall Cronin’s charges look in good shape to clinch a semi-final spot as Group winners.

Saturday’s lunch-time encounter in St Conleth’s Park was a bigger test than the scoreline might suggest with Kildare overcoming an error-ridden first half against a well-organised Longford side who had beaten Meath in their opening encounter the week before.

Playing into a strong wind in the first period, Kildare found it difficult to make any headway against a Longford side playing a counter-attacking side with a sweeper and a goal early on from Paddy Moran spurred on the visitors. They still held the advantage of that goal at half-time, leading 1-4 to 0-4.

Kildare had opened the scoring through Tom Kelly after six minutes before a good free from Matthew Carey from nearly 40 metres levelled matters. After wing back Ben Ryan conceded a free, harshly awarded perhaps, while on a forward sortie, the visitors cut the home defence open with a long free from Ben Mulvey and a one-two between Paddy Moran and Michael Flynn that saw the former palm home unopposed at the back post.

Cian O’Reilly immediately replied for Kildare with a point before a close-range free from Killian Browne but two points from Moran from play and a free from Carey produced only a neat point from Ben Loakman in reply as Longford went in at half-time in the ascendancy.

Cronin’s side were a different animal after the break, however. They had looked stronger at midfield in the first half with Ryan Sinkey and O’Reilly starring but that dominance became more pronounced and a more direct style of play with the wind began to reap rewards.

By the third minute of the second half, they were in front. After a fine run and point on the left wing from the impressive Ben Ryan, Kildare earned the first of two penalties when Loakman stabbed the ball to Jay O’Brien and he was foot-blocked by Longford sweeper Mulvey. Loakman coolly slotted home the spot kick.

Longford only had two scorers in Moran and Carey all game and that contrasted sharply with the home side who had nine different players on the scoreboard, including two of the substitutes.

Excellent long-range points from Loakman and Browne helped Kildare to a 1-7 to 1-5 advantage by the 42nd minute, Carey with a sole reply from a close-in free, but the young Lilywhites suffered a blow with Ryan’s departure on a black card for an off-the-ball obstruction.

Longford initially used the extra man to their advantage, Carey scoring a point from a free and then another from play to level matters with eleven minutes remaining. But by the time Ryan returned, his colleagues had edged two clear once more, Ryan Rainey with a smashing point off the outside of his right boot and substitute Eoin Cully intercepting a poor clearance from goalie Caolan Hussey to fire over.

Carey’s sixth point of the game seemed to signal a nervy finish for the home team but well-taken points from Loakman, Sinkey and another substitute Joe Hanamy from a right-wing free put Kildare in command.

While Kildare were deserving winners against a Longford side who may still have a say in the destination of the provincial crown, a second penalty awarded in injury time when Cully was taken down by ‘keeper Hussey and finished with equal aplomb to his first by Loakman, applied a somewhat artificial gloss to the scoreline.