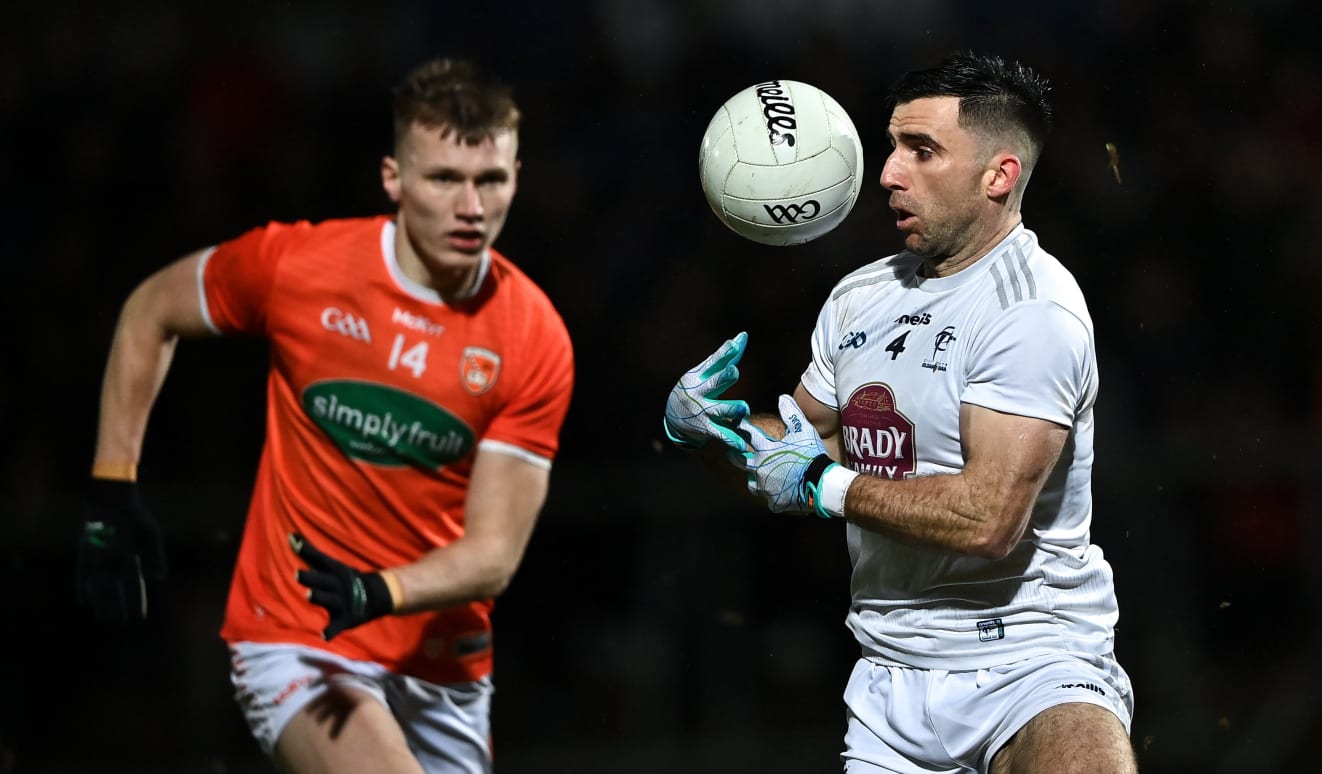 Another chastening trip North for Kildare on Saturday night saw them produce what Glenn Ryan described as their worst performance of the Allianz League campaign, a result that seriously imperils their hopes of a prolonged stay in Division 1.

Just as they did two years ago at the same venue, the heavens opened and a sticky pitch made flowing football difficult as did the defensive tactical set-up of both sides. Numbers on jerseys meant little with both sides getting everybody behind the ball. One Armagh attack saw all thirty players in the Kildare half, including wandering Orchard goalie Ethan Rafferty.

Kildare defended well enough in their full-back line again, Shea Ryan producing his best display yet in a white jersey, but Armagh are a seasoned team now after eight years under Kieran McGeeney and their ability to both swarm the away forward division and transition into overlapping numbers when down the other end was the big difference between the two sides.

The wind was nothing like as influential as two years ago but slightly favoured Kildare in the first half even if it seemed to blow into the left corner, a trait which didn’t help their shooting in that opening period. That may be a charitable view, however, with the Lilies kicking just six points from fifteen attempts with seven wides and two efforts dropping short.

Two of those wides were scoreable frees from Paddy Woodgate which he didn’t convert, and you really can’t afford to be missing those chances at this level. To be fair the Raheens man put in another big shift and recovered to score from a third free attempt as well as registering two more from play.

Kildare made a bright start on the scoreboard with points from Woodgate, after a turnover by Fergal Conway of Rafferty’s short kick-out, and a 40-metre Daniel Flynn mark in the 5th and 7th minutes. They had already had a couple of let offs though.

In the game’s opening move, a Rian O’Neill ball across the goalmouth found centre-back Niall Rowland ghosting in un-marked at the far post but he sliced his effort off the upright and wide. Then, in between the two Kildare points, midfielder Ciaran Mackin drew a good save from Donnellan when he had the space in front of him to shoot from closer range.

Armagh did get off the mark on 9 minutes when Aidan Forker swung over a superb point from the right wing after a patient build-up. Three Kildare misses, a high hanging effort from Aaron Masterson, a short effort from Paul Cribbin and a wide from Ben McCormack, preceded Tiernan Kelly’s 12th minute equaliser for the home side.

McCormack made amends for his earlier miss, picking up a ball which ran away from Flynn and snapping a first-time shot over the bar. Jemar Hall equalised straight away however, reprising Forker’s effort from the right.

The game’s crucial score arrived on 20 minutes and owed much to Armagh’s ability to break-down the packed Kildare defence.

Ben Crealey had too much power for Daragh Ryan in the first-instance, Rory Grugan made further progress and Jemar Hall had time to drop the ball and pick it up again before finding Jarly Óg Burns unmarked in the penalty area. James Murray bravely smothered his kick but from the rebound Andrew Murnin’s ground shot had too much power for Donnellan.

To their credit, Kildare heads did not drop and they roared back level with the game’s next three points. After a wild wide from Flynn, Woodgate intercepted another short kick-out and placed Jimmy Hyland in for his first score of a quiet first-half.

Hyland returned the favour on 26 minutes. Brilliant defending from Masterson and Shea Ryan set Kildare on the attack and Woodgate fired over from the Ballyteague man’s pass.

Armagh prized Kildare open for their third goal attempt from the kick-out though, a driven ball in from Kelly finding O’Neill ghosting in behind Shea Ryan. He may have had time to collect the ball but instead attempted a deft fist past Donnellan. The Maynooth man was equal to it, a one-handed save directing the ball into the safety of Mick O’Grady’s hands.

On the half-hour Woodgate found his free-taking range after a foul on Conway to level matters at 0-6 to 1-3 but O’Neill in turn profited from a foul by Ryan Houlihan with a tap-over free before half-time.

Kildare could have done with a strong start to the second half but when Daragh Ryan gained possession inside his own ‘D’ and an Armagh player landed on top of him, referee Joe McQuillan somehow deemed Ryan to have been the transgressor for over-carrying. Grugan made no mistake.

Up the other end, McQuillan made amends, awarding Hyland a soft enough free which he converted himself. But points from Burns and Grugan on 41 and 47 minutes, both players given far too much space, stretched the home lead to three points once more.

Poor misses from Hyland and Flynn (two) didn’t help matters but a foul on the Johnstownbridge man gave Hyland another score from a 53rd minute free into the wind.

Armagh’s bench proved the more effective in the latter stages and the experienced Stefan “Soup” Campbell scored the first of two superb points and O’Neill, who like his opposite number 14 Flynn failed to score from play, nailed a ’45 to stretch the Orchard lead to four points.

To their credit, Kildare again came back and quickfire points from substitute Darragh Kirwan and a Hyland free which he won himself, gave them real hope of a grandstand finish with just two between them and seven minutes remaining.

Disappointingly, it was the home side who finished strongly, though. Campbell’s second point squeezed inside the post on 68 minutes and a Jason Duffy mark a minute later gave them assurance heading into five minutes of injury time. They stretched the lead to five with O’Neill’s free.

Kildare will be happy to have Monaghan in the comforting surroundings of St Conleth’s Park on Sunday after three fruitless trips to Ulster.