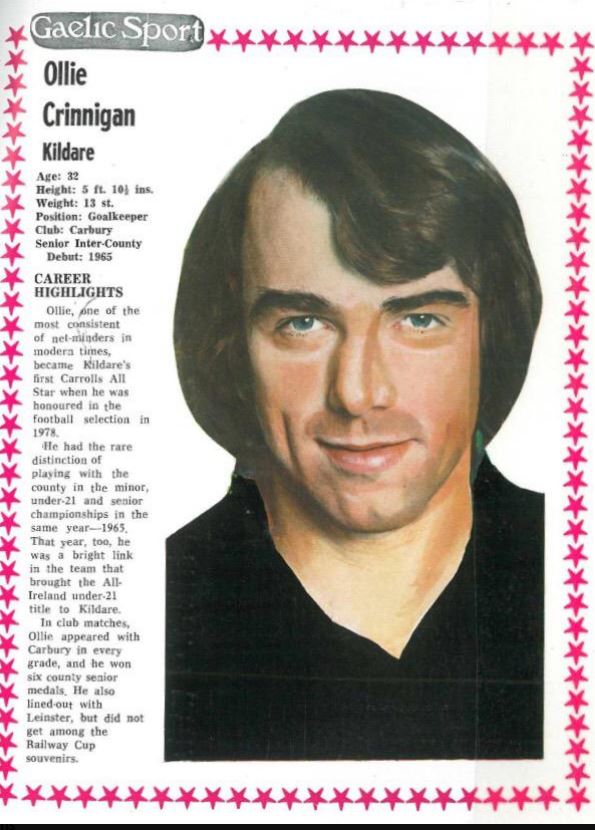 A Tribute to Ollie Crinnigan on his induction to the Leinster GAA Hall of Fame earlier this year. Article by Richard Commins previously appeared in the Kildare Nationalist.

Carbury and Kildare legend Ollie Crinnigan was inducted into the Leinster GAA Hall of Fame on Sunday, a fitting tribute to one of the game’s finest goalkeepers. He joins Raheens’ Pat Dunny in winning that honour. Ollie started off as a full-back with his school in Edenderry and was picked in that position with Kildare minors and Offaly Vocational Schools. At Edenderry, he can’t but have been inspired by teacher Johnny Geraghty, the great goalkeeper on the magnificent Galway team of that era.

Indeed, Ollie was moved to goalkeeper for a county minor game against, ironically, Offaly and that’s where he stayed.

Crinnigan made his senior debut in May, 1965. Remarkably he had already kept goal for the minors in the curtain-raiser as Kildare ran out easy winners in both games.

Later that year of course, Crinnigan was on the under-21 team that brought home the All Ireland title.

His record at senior level has shades of Johnny Doyle about it, and perhaps it was appropriate that Johnny was back on the Croke Park sod on Sunday. Ollie was an ever-present in championship football from his debut right through to his retirement in 1980 – sixteen seasons.

In all he made 132 League and Championship appearances (139 in all) in the black jersey. Eight different deputies were given a handful of League/O’Byrne Cup appearances during that time to keep their hand in but none were called upon in the heat of summer.

He also suffered a National League Final defeat to Down in 1978 but won a Division Two title in 1974 when we beat an emerging Dublin side in the Home final and then Warwickshire.

Ollie’s last game was the 1980 Leinster Semi-Final against… Offaly of course.

Crinnigan was Mr. Consistency, renowned as a superb shot-stopper and perhaps the absence of TV coverage and Kildare’s failure to reach the televised (semi-final) stage of the All-Ireland championship didn’t help his chances of an All Star earlier than 1978.

Finally, though, his consistency earned him the ‘gong’, ahead of the likes of Gay Sheeran, Billy Morgan, Gay Mitchell, Martin Furlong and Paddy Cullen. Kerry’s Charlie Nelligan was ruled out having been sent off that season.

It would be thirteen years until Martin Lynch became the second Kildareman to win the honour.

Crinnigan admitted to the Kildare Nationalist a few years ago that he will never forget when he was honoured as being the first man from the county to receive the award.

“It was a big deal for me at the time because we had never got one and never looked like getting one because that time it was normally All-Ireland finalists and semi-finalists who got them,” said Crinnigan.

“Nowadays you have quarter-finals and back doors and things like that which weren’t there back then. The competition for goalkeepers at that time was fierce”.

In the club game Crinnigan was part of an all-conquering Carbury side that, along with Raheens and Clane, dominated the Kildare scene during his career. In all he won 7 county SFC titles between 1965 and 1985 and represented Leinster when that was something to be cherished.

There has been no finer servant to Kildare club and county football.